'; .net - Drawing on top of controls inside a panel (C# WinForms) - LavOzs.Com
dtroy

I know this question had been asked more than a few times, but so far I haven't been able to find a good solution for it.

I've got a panel with other control on it.
I want to draw a line on it and on top of all the controls in the panel

I came across 3 types of solutions (non of them worked the way I wanted) :

and then drawing the line OnPaint(). But... Since the panel's OnPaint is called before the OnPaint of the controls in it, the drawing of the controls inside simply paints on top of the line.
I've seen someone suggest using a message filter to listen to WM_PAINT mesages, and use a timer, but I don't think this solution is either "good practice" or effective.
What would you do ? Decide that the controls inside have finished drawing after X ms, and set the timer to X ms ? 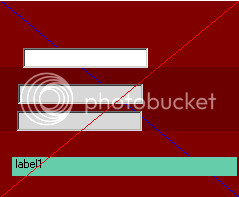 The problem is still, putting the transparent control on top of the Panel and all its controls.
I've tried bringing it to the front using: "BringToFront()" , but it didn't seem to help.
I've put it in the Line control's OnPaint() handler.
Should I try putting it somewhere else ??
- This also creates issue with having another control on top of the panel. (catching the mouse clicks etc..)

Any help would be greatly appreciated!

**EDIT: The black line is a sample of what I was trying to do. (used windows paint to paint it)

Turns out this is a whole lot easier than I thought. Thanks for not accepting any of my other answers. Here is the two-step process for creating a Fline (floating line - sorry, it's late): 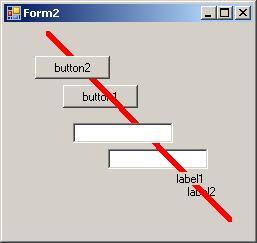 Step 1: Add a UserControl to your project and name it "Fline". Add the following to the using statements:

Step 2: Add the following to the Fline's Resize event:

Compile, and then drag a Fline onto your form or panel. Important: the default BackColor is the same as the form, so change the Fline's BackColor to Red or something obvious (in the designer). One weird quirk about this is that when you drag it around in the designer it shows as a solid block until you release it - not a huge deal.

This control can appear in front of or behind any other control. If you set Enabled to false, it will still be visible but will not interfere with mouse events on the controls underneath.

You'll want to enhance this for your purposes, of course, but this shows the basic principle. You can use the same technique for creating a control of whatever shape you like (my initial test of this made a triangle).

Update: this makes a nice dense one-liner, too. Just put this in your UserControl's Resize event:

If you want the line to be just a simple horizontal or vertical line, put another panel (disabled so it doesn't pick up any mouse events) on the main panel, set its height (or width) to 3 or 4 pixels (or whatever you want), and bring it to front. If you need to change where the line is during runtime, you can just move the panel around and make it visible and invisible. Here is how it looks: 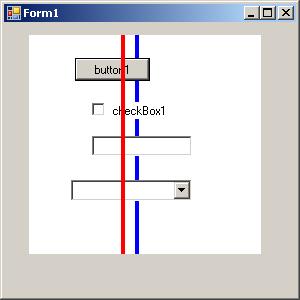 You can even click anywhere you like, and the lines don't interfere at all. The line is drawn over any kind of control at all (although the dropdown part of a ComboBox or a DatePicker is still shown above the line, which is good anyway). The blue line is just the same thing but sent to back.

Yes, this can be done. The problem is that the panel and the controls on it are all separate windows (in the API sense), and thus all separate drawing surfaces. There is no one drawing surface to draw on to get this effect (other than the top-level screen surface, and it's considered impolite to draw all over that).

The (cough-hack-cough) trick is to draw the line on the panel underneath the controls, and also draw it on each of the controls themselves, resulting in this (which will persist even when you click the buttons and move the mouse around):

Create a winforms project (which should come with Form1 by default). Add a panel (named "panel1") and two buttons ("button1" and "button2") on the panel as shown. Add this code in the form's constructor:

and then add this method to the form's code:

Something like this needs to be drawn in each control's Paint event in order for the line to persist. It's easy to draw directly on controls in .NET, but whatever you draw is wiped away when someone clicks the button or moves the mouse over it (unless it's perpetually redrawn in the Paint events, as here).

Note that for this to work, any control drawn over has to have a Paint event. I'm sure you will have to modify this sample to achieve what you need. If you come up with a good generalized function for this, please post it.

Update: this method will not work for scrollbars, textboxes, comboboxes, listviews, or basically anything with a textbox-type thing as part of it (and not because it only offsets for buttons in the example above - you just can't draw on top of a textbox at all, at least not from its Paint event, at least not if you're me). Hopefully that won't be a problem.

A windows forms panel is a container for controls. If you want to draw something on top of other controls within a panel, then what you need is another control ( at the top of the z order ).

Luckily, you can create windows forms controls which have non-rectangular borders. Look at this technique: http://msdn.microsoft.com/en-us/library/aa289517(VS.71).aspx

To just draw something on the screen, use a label control, and turn AutoSize off. Then attach to the Paint event and set the Size and Region Properties.

then call BringToFront() after the InitializeComponent

I've added some support for controls that repaint when they get the focus.

textboxes and comboboxs wont work as is you will need to make your own and hook there paintish commands like so:

Its not tested and i'm sure you can improve on it

The only simple solution I can think of is to create Paint event handlers for each control you want to paint on top of. Then coordinate the line drawing between these handlers. This is not the most convenient solution, however this will give you the ability to paint on top of the controls.

Assuming button is a child control of panel:

EDIT Found a way to get rid of the recursive painting issue I had. So, now, to me, this looks very, very, very close to what you want to achieve.

Here's what I could come up with. It uses approach #3 outlined in the original question. The code is somewhat lengthy because three classes are involved:

The basic approach is:

Let me know what you think ...

I think the best way is to inherit the control of which you want to draw a line on. Override the OnPaint method, call base.Paint() from within, after that draw the line using the same graphic instance. At the same time, you can also have a parameter which specific at which point the line should be draw, so that you can control the line directly from your main form.

Original code should be :

How about this take on solution #1 (Get the desktop DC and Draw on the screen):

Related
How to create a transparent control which works when on top of other controls?
WinForm Controls + Transparency
User control disapear when added to a Panel
Windows Form Custom Panel with Transparent Child Issue
Optimize drawing to buffer C#
Most efficient way to draw on the top of the Screen (Overlay layer). in .Net?
touch scrolling for winforms in C#
Transparent Panel of PictureBox on top of WindowsMediaPlayer