Which one is meaningful when benchmarking my app?

One of these things is not like the other. Real refers to actual elapsed time; User and Sys refer to CPU time used only by the process.

User+Sys will tell you how much actual CPU time your process used. Note that this is across all CPUs, so if the process has multiple threads (and this process is running on a computer with more than one processor) it could potentially exceed the wall clock time reported by Real (which usually occurs). Note that in the output these figures include the User and Sys time of all child processes (and their descendants) as well when they could have been collected, e.g. by wait(2) or waitpid(2), although the underlying system calls return the statistics for the process and its children separately.

Origins of the statistics reported by time (1)

On a multi-processor machine, a multi-threaded process or a process forking children could have an elapsed time smaller than the total CPU time - as different threads or processes may run in parallel. Also, the time statistics reported come from different origins, so times recorded for very short running tasks may be subject to rounding errors, as the example given by the original poster shows.

A brief primer on Kernel vs. User mode

On Unix, or any protected-memory operating system, 'Kernel' or 'Supervisor' mode refers to a privileged mode that the CPU can operate in. Certain privileged actions that could affect security or stability can only be done when the CPU is operating in this mode; these actions are not available to application code. An example of such an action might be manipulation of the MMU to gain access to the address space of another process. Normally, user-mode code cannot do this (with good reason), although it can request shared memory from the kernel, which could be read or written by more than one process. In this case, the shared memory is explicitly requested from the kernel through a secure mechanism and both processes have to explicitly attach to it in order to use it.

The privileged mode is usually referred to as 'kernel' mode because the kernel is executed by the CPU running in this mode. In order to switch to kernel mode you have to issue a specific instruction (often called a trap) that switches the CPU to running in kernel mode and runs code from a specific location held in a jump table. For security reasons, you cannot switch to kernel mode and execute arbitrary code - the traps are managed through a table of addresses that cannot be written to unless the CPU is running in supervisor mode. You trap with an explicit trap number and the address is looked up in the jump table; the kernel has a finite number of controlled entry points.

The 'system' calls in the C library (particularly those described in Section 2 of the man pages) have a user-mode component, which is what you actually call from your C program. Behind the scenes, they may issue one or more system calls to the kernel to do specific services such as I/O, but they still also have code running in user-mode. It is also quite possible to directly issue a trap to kernel mode from any user space code if desired, although you may need to write a snippet of assembly language to set up the registers correctly for the call.

There are things that your code cannot do from user mode - things like allocating memory or accessing hardware (HDD, network, etc.). These are under the supervision of the kernel, and it alone can do them. Some operations like malloc orfread/fwrite will invoke these kernel functions and that then will count as 'sys' time. Unfortunately it's not as simple as "every call to malloc will be counted in 'sys' time". The call to malloc will do some processing of its own (still counted in 'user' time) and then somewhere along the way it may call the function in kernel (counted in 'sys' time). After returning from the kernel call, there will be some more time in 'user' and then malloc will return to your code. As for when the switch happens, and how much of it is spent in kernel mode... you cannot say. It depends on the implementation of the library. Also, other seemingly innocent functions might also use malloc and the like in the background, which will again have some time in 'sys' then.

To expand on the accepted answer, I just wanted to provide another reason why real ≠ user + sys.

Keep in mind that real represents actual elapsed time, while user and sys values represent CPU execution time. As a result, on a multicore system, the user and/or sys time (as well as their sum) can actually exceed the real time. For example, on a Java app I'm running for class I get this set of values:

• real: The actual time spent in running the process from start to finish, as if it was measured by a human with a stopwatch

• user: The cumulative time spent by all the CPUs during the computation

• sys: The cumulative time spent by all the CPUs during system-related tasks such as memory allocation.

Notice that sometimes user + sys might be greater than real, as multiple processors may work in parallel.

To make things more concrete, I want to exemplify a few extreme cases of time with some minimal C test programs.

All programs can be compiled and run with:

Non-busy sleep does not count in either user or sys, only real.

For example, a program that sleeps for a second:

The same holds for programs blocked on IO becoming available.

For example, the following program waits for the user to enter a character and press enter:

And if you wait for about one second, it outputs just like the sleep example something like:

For this reason time can help you distinguish between CPU and IO bound programs: What do the terms "CPU bound" and "I/O bound" mean?

Then we plot wall, user and sys as a function of the number of threads for a fixed 10^10 iterations on my 8 hyperthread CPU: 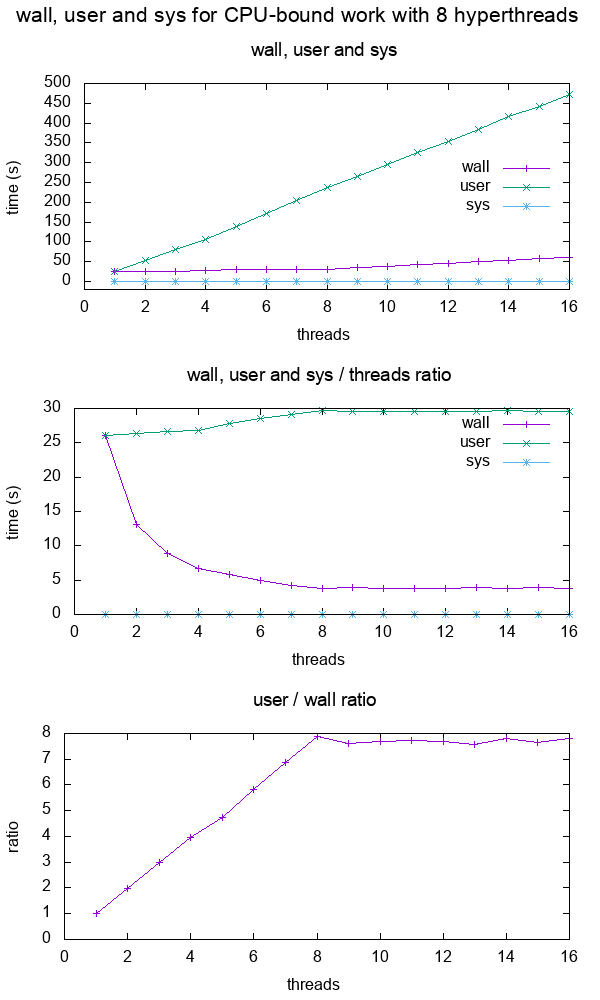 From the graph, we see that:

Note that this graph is only so clear and simple because the work is purely CPU-bound: if it were memory bound, then we would get a fall in performance much earlier with less cores because the memory accesses would be a bottleneck as shown at What do the terms "CPU bound" and "I/O bound" mean?

The heaviest sys workload I could come up with was to use the sendfile, which does a file copy operation on kernel space: Copy a file in a sane, safe and efficient way

So I imagined that this in-kernel memcpy will be a CPU intensive operation.

First I initialize a large 10GiB random file with:

Then run the code:

I was also curious to see if time would distinguish between syscalls of different processes, so I tried:

And the result was:

The sys time is about the same for both as for a single process, but the wall time is larger because the processes are competing for disk read access likely.

So it seems that it does in fact account for which process started a given kernel work.

When you do just time <cmd> on Ubuntu, it use the Bash keyword as can be seen from:

So we grep source in the Bash 4.19 source code for the output string:

all of which are Linux system calls and POSIX functions.

If we call it as:

then it uses the GNU Coreutils implementation.

This one is a bit more complex, but the relevant source seems to be at resuse.c and it does:

Real shows total turn-around time for a process; while User shows the execution time for user-defined instructions and Sys is for time for executing system calls!

Related
Calculate relative time in C#
How do I list all cron jobs for all users?
Use grep --exclude/--include syntax to not grep through certain files
How to get the current time in Python
In the shell, what does “ 2>&1 ” mean?
Convert a Unix timestamp to time in JavaScript
How do I get time of a Python program's execution?
Ruby Benchmark module: meanings of “user”, “system”, and “real”?
What is the meaning of “POSIX”?
How to get current time and date in Android